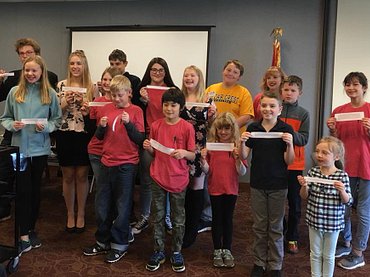 The Children of the American Revolution (C.A.R.) is a wonderful organization for creating a love of patriotism and developing future leaders. Members learn about history and the value of community service.

The C.A.R. is organized into local, state, and national societies.  Please use the links above to explore more about the work of each of these groups.

If you are interested in learning more about membership in our society, please contact our Senior Society President.

The Children of the American Revolution, the nation's oldest, largest, patriotic youth organization, offers membership to anyone under the age of 21, lineally descended from someone who rendered material aid to the cause of American Independence as a soldier, sailor, civil officer, or recognized patriot in one of the several Colonies or States, or of the United States. C.A.R. activities focus on patriotism, service, and education about our American heritage.

Harriett Lothrop, a prominent citizen and 19th century children's author of Concord, MA, presented the idea for a children's organization to the Daughters of the American Revolution Continental Congress in 1895; it was then chartered by the United States Congress. Organized "for the training of young people in true patriotism and love of country," C.A.R. has promoted this vision to hundreds of thousands of members. These boys and girls are the leaders of yesterday, today and tomorrow, now in a second century of keeping patriotism alive.

Welcome to the Towamencin Society, C.A.R.  Our society serves Montgomery County and Central Bucks County, Pennsylvania, and we have members from across the United States, as well!

The Towamencin Society, C.A.R. is sponsored by the Towamencin Chapter of the Daughters of the American Revolution and was re-organized in 2009.  Our membership is growing!

Please explore the links above to learn about our organization and society.  If you would like more information about becoming a member, please contact our Senior Society President.